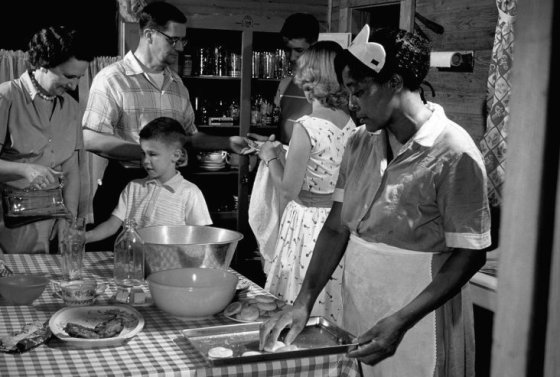 OVERVIEW
“It is not surprising that on the eve of World War II,” Carole C. Marks states in her journal article, “The Bone and Sinew of the Race: Black Women, Domestic Service, and Labor Migration,” that [nationwide] according to the 1940 census, 59.5 percent of employed black women were domestic workers” (165). It is not surprising because black women during that time period had little recourse but to work in domestic service. Racism and segregation were firmly in place whether in the north or in the south. Black women were prohibited from working in most jobs from offices to factory work. According to “Maid in New Jersey: Black History Month Looks at Domestic Workers,”  a local newspaper article by Kathleen O’Brien,  the 1940 census also revealed that a whopping “75 percent of the 32,000 employed black women in New Jersey” worked as maids or in some sort of domestic service. Only 407 employed black women in New Jersey were listed as being teachers. Even after World War II, by 1950, 43 percent of black women still worked in what was termed “private service.”

Although conditions for black maids were purportedly less fraught then conditions in the south, northern maids still faced low wages, the threat of sexual abuse, and long backbreaking hours of work. “Working conditions in the North were no better than those in the South,” according to Marks. “Early morning recruitment of domestics in New York, a process that was continued well into the 1950s, resembled nothing so much as a slave market”(162). Noted author Richard Wright conducted hours of interviews with the black maids who were forced to look for work at the slave market. In the early 1904s, he wrote a novel, Black Hope, which focused on the women’s plight.  Unfortunately, although highly anticipated in the trade press, the book was never published.